check out this rad MURS hat i just got: 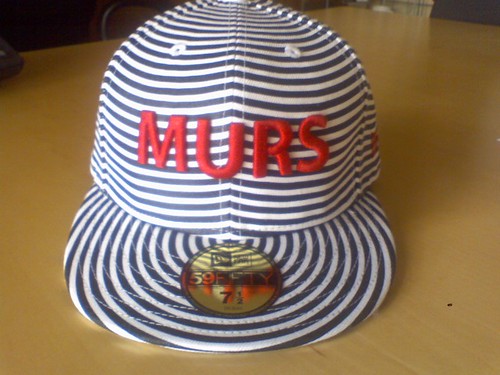 The devil only exists because of your belief in him
Same goes for that other guy
I believe the sun is simply reflecting the shine from the moon (word?)
Stealing its spotlight, they'll have a cockfight at noon
To settle their differences
At midnight, rematch
To stir up their similarities on turntables
That chicken scratch proved to be unreadable
The determining factor in who gets the pitch to control the tides
No one decides a victor unless they give a fair listen to both the sides
We're low-lives
We go blind jerking off to the eclipse
The sun was pulling cheap shots doing commercial body tricks
Behind the back
Under the leg
I think he even did a headspin
On a crossfader that sounded whack
What protection in
All of the sudden it gets dim
The crater face steps in
Puts mexican drumbreaks on the Technics
He's like "Let's begin"
He conducted an orchestra so dope the sun started sweatin' him
I guess he'd expected to win on pure artistic merit
Composing complex plays with nothin but soundbytes
Burned out the lights
Made MCs too self conscious quit the master mics
For a thousand nights
Continued without a single slip up
Except once the record skipped
But it kinda sounded cool
And fit within the rhythm he was juggling
Poly-rhythms out of country western albums spinning
It is plain that he had come to win
But as always due to corrupt judging
They drew a tie
Now it's do or die

God's not a woman
He's a bitch


Kinda has a rage feel to it.
(this album wants you)

I decided to join. I just heard 'A healthy distrust' by Sage Francis. The album is great, I had to share that with someone.

Well, I'm new here, just found out about the communities today. This seems to be the best one for this type of muisc, not many members though..need to do some recruiting. Looking through the interests of this group..I listen to pretty much all of it, I was blown away to see DZK on the list along with OddJob, your missin Warbux though. Does DZK know about this?
This is the year for underground music, Psycho-Logical is just killin it with releases and all of them have been near classics. Don't forget to go cop Necros new album on the 28th! Jedi Mind Tricks new album is sick along with the new J-Zone album.
Canibus seems to be back to regular form. If you haven't heard it is rumored he signed to DJ Kay Slays lable. He has been featured on a couple mixtapes from the Drama King alongside Shaq and Papoose, where he just rips it up like he use to..and Cory Gunz is also with them.
Through all this mainstream garbage that is out and seeing how the underground is coming up, which to me is the REAL rap music, it puts my faith back into hip-hop. Nice to see people who are into the same music, thats not easy to find.

wow...it really looks like people have joined your community..

at least ive liked it so far..!

got the NonPhixion & Atmosphere pics back..hott as fuck!
show em online when i can..
pCe hOmies

ey..this is my new sn k..the other ones r for my "pothead" communities.

im finally joined and cant wait to see my pics from wapred with Ill Bill n NonPhixion.
u have to gimme the camera so i can send him my shirt to post on his site.

Hello and Welcome...Here you will find everything that has been
Collapse